< Back
You are here:
Print

The pectoralis major muscle is a large muscle that arises from the chest wall and inserts onto the shoulder. It consists of 2 parts: the clavicular and sternal heads. (See attached image). 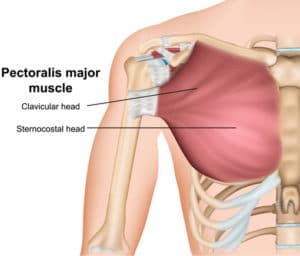 It is an important muscle for normal shoulder function, especially shoulder adduction (moving the arm across the chest) and internal rotation, and it contributes to forward elevation.

It is most commonly injured in 20-40-year-old men, during bench press, when the shoulder has extended too far causing the elbows to move beyond the sides of the chest. It can also occur during other contact sports such as rugby and wrestling. There is an increased incidence amongst athletes using anabolic steroids because their tendons become stiffer and the collagen content changes.

When the pectoralis major tendon tears, the patient will usually feel and hear something “snap” or “pop” and will notice that the muscle cramps up immediately. Bruising and swelling develops over the inner aspect of the upper arm and spreads to the chest wall. The nipple can also appear in a lower position than the normal side (dropped nipple sign). Asymmetry of the chest wall is obvious when the patient tries to contract both pectoralis muscles, such as when squeezing his hands together. An MRI is the investigation of choice to define the tear size and location.

Literature has shown that patients with pectoralis major tendon ruptures have better outcomes after surgical management. Conservative treatment is reserved for certain partial thickness tears or tears involving the muscle belly, but it can also be considered for older, less active patients with full thickness pectoralis major tendon ruptures. The arm should be placed in a sling for 4-6 weeks. An ice pack can be applied for 15-20 minutes at a time to reduce swelling and simple pain killers can be taken as needed.

As the pain improves, gentle active assisted range of motion can be started (using your opposite arm to move your affected shoulder). Active shoulder movement can be started at 4 – 6 weeks and progress to gentle resistance exercises at 8 weeks. Full resistance should only be attempted at 4 months following the injury.

As mentioned before, the recommended treatment for pectoralis major tendon ruptures is surgery. It is performed under a general anesthetic (meaning you are asleep during the procedure). An incision is made in line with the axillary skin fold and the torn end of the ruptured pectoralis major tendon is retrieved. The tendon end is often retracted (especially in more chronic cases) and need to be released to allow better excursion so that the tendon can reach the humeral insertion point. There are various described techniques to repair the tendon back onto the humerus.

Sutures or tapes are passed through the tendon end and then secured onto the humerus with small metal buttons or by simply passing the sutures through tunnels drilled through the bone. As the sutures are tightened and tied, the muscle is drawn back towards the humerus. With very old injuries, the pectoralis major tendon may be so contracted and scarred that it won’t reach the humerus, and a pectoralis major tendon reconstruction may be required, using a hamstring tendon graft.

The skin incision is closed in layers and a dressing is applied that will stay on for 10-14 days. The arm is placed in a sling for 6 weeks.

Please contact the medical practice to arrange a consultation.